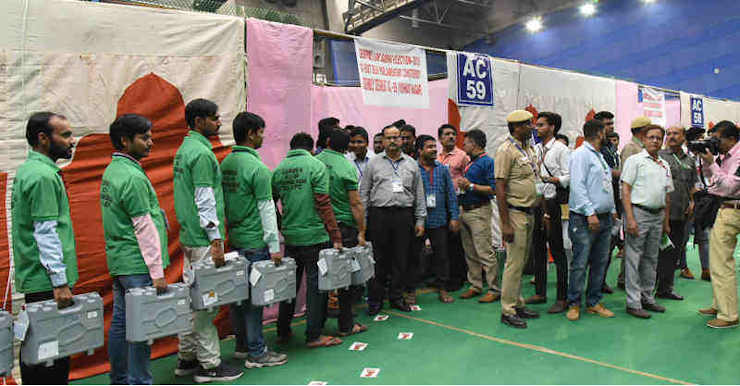 The electoral officials carrying Electronic Voting Machines (EVMs) for counting, at a counting centre of General Election 2019, at CWG Village, Sports Complex, in New Delhi on May 23, 2019. Photo: PIB

Indian voters should not blindly follow any politician because most of the politicians in all political parties are crooks.

Today, India is standing at the crossroads where the country’s 1.4 billion people are facing a grave threat from their own political rulers who have been exploiting the sentiment of people for the past seven decades after India got independence from the Britishers in 1947.

While almost all politicians here are corrupt – many are facing serious criminal charges – they have been winning elections by dividing voters on the basis of their caste, creed, color, and religious affiliations. Elections are also being won by bribing the voters, intimidating them, or by tampering with the Electronic Voting Machines (EVMs). Also, the autocratic rulers frequently purchase legislators in horse-trading deals to steal elections and form governments unscrupulously.

It is also observed that people who vote in Indian elections are mostly poor, uneducated, and ignorant who can easily be cheated by corrupt politicians with their ad campaigns and false promises. As a result, illiterate politicians or those with serious criminal records (history-sheeters) get elected and behave as dictators with ordinary citizens. These politicians are supported by unskilled bureaucrats. People of India are almost dying under the misrule of such politicians and bureaucrats who are operating as robbers and dacoits.

Plus, there is a dangerous nexus between capitalists and shady politicians who want to stay in power by hook or by crook. Together, they have reduced India to a level of criminalized kleptocracy, in which all the four pillars of democracy have collapsed.

Now it is being observed that India has become a kakistocracy where the government is under the control of the worst, least qualified, and the most unscrupulous people. The sorry plight of Indians indicates that India has already become a politically unstable banana republic with rampant lawlessness, corruption, and exploitation of the ordinary citizens.

– The victory in an Indian election is based on a politician’s capacity to tell lies and hoodwink the voters most of whom are uneducated.

– In today’s increasingly specialized and cut-throat world, a person needs in-depth knowledge and extensive domain expertise to handle a particular department even in a small company. But it is highly unfortunate that people with no qualification or expertise become Presidents, Governors, Prime Ministers, ministers, and bureaucrats in India to manage highly complex domains of governance. That’s why India continues to be a poor, underdeveloped country.

– As most Indian ministers are intellectually challenged, they cannot solve any problem that needs the use of intellect. In order to make their presence felt, they wear colorful clothes everyday and appear superficially in razzmatazz such as inauguration events and lamp-lighting ceremonies. People of India do not need ministers to do all these mundane jobs which even a donkey or a monkey can do.

– As they are extremely inefficient and illiterate, Indian politicians and bureaucrats do not take decisions to resolve public problems. They keep rotating written public complaints from one desk to another. Consequently, citizens are left with no other option but to approach the courts. As courts are always overcrowded, their decisions are either inordinately delayed or lack justice.

– Although the Indian government claims that it has become paperless, the politicians and bureaucrats are so uneducated that they cannot even open, read, and respond to emails of citizens. The online complaint filing systems of the government are so absurd that you cannot use them. Finally, the citizens have to stand in long queues in front of government offices to express their grievances which are hardly addressed. Thus, commoners in India are still living in slavery.

– Tax is the money that ordinary citizens and businesses are forced to give to the government thieves who squander that money at will.

Fact 1. All politicians are corrupt.
Fact 2. If you think some of them are not corrupt, see Fact 1.

– No government in India is willing to stop corruption because it has become the lifeblood of Indian bureaucrats and politicians.

– As India continues to be an underdeveloped country, the politicians hoodwink the voters and win elections by promising basic amenities such as drinking water, electricity, and cooking gas which are scarce across the country.

The detailed information in our “Real Voter” magazine which is given below will reveal the extent of damage that Indian politicians of all political parties have done to the country and its people. This information further shows that India continues to be an underdeveloped country. Here we will cover the good, the bad, and the ugly of Indian politics. You are invited to visit this section regularly.

You can download the April 2020 issue of the Real Voter magazine and share it with your friends and colleagues so that they could proactively support this editorial initiative. It is also given below in the digital format.

DISCLOSURE: I am an independent journalist and do not belong to any political party. My editorial objectivity and aversion to the flawed political system in India can be assessed from the fact that I have not voted in any Indian election during the past more than 2 decades. I strongly believe that all political parties in India are full of dishonest politicians who are hell-bent to further destroy the country which exists merely as an underdeveloped piece of land on the face of the earth.

Stories of Economic and Political Upheavals in the World RMN Foundation   |   May 6, 2021